Cellular and Molecular Neurobiology of Behavior

Our experiments are conducted in a preparation that has a relatively simple nervous system – the marine mollusc Aplysia californica. The central nervous system of this animal is distributed into several ganglia that contain a limited number of neurons, many of which are large and easily identifiable as unique individuals. Our experiments are multidisciplinary and utilize behavioral, morphological, electrophysiological, cell biological and molecular-biological approaches. In general, we study the neural basis of forms of behavioral plasticity that are due to changes in the internal state of an organism. Our primary interest is in mechanisms that establish internal states and in memory mechanisms that allow states to persist. 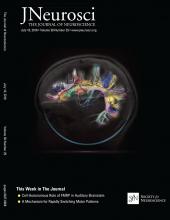 Cropper EC, Perkins MH, Weiss KR Cellular Effects of Repetition Priming in the Aplysia Feeding Network Are Suppressed during a Task-Switch But Persist and Facilitate a Return to the Primed State. J Neurosci 38:6475-6490

Wang et al. Network Degeneracy and the Dynamics of Task Switching in the Feeding Circuit in Aplysia. PMID 31548235