Laboratory of Neural and Immune Mechanisms of Psychiatric Illness

A major focus of my research is to study the neural and immunological mechanisms of neuropsychiatric disorders such as depression and anxiety. We use a combination of transgenic mice, immune cell transplantation, optogenetics/electrophysiology, viral mediated gene transfer, behavioral models and molecular methods to understand how the brain and body adapts to stress to control pathological behaviors in depression and anxiety.

Stress leads to synaptic adaptations within multiple structures throughout the CNS that control mood and emotion leading to the expression of depression- or anxiety-like behaviors [1]. The nucleus accumbens (NAc), is a stress-responsive brain region that undergoes extensive remodeling of excitatory synapses following stress [1]. Recent work demonstrates increased excitatory synaptic input on medium spiny neurons (MSNs) in the NAc following chronic social defeat stress (CSDS), which controls social avoidance and anhedonia [2, 3]. However, the NAc receives multiple glutamatergic inputs from a number of presynaptic regions, including both the prefrontal cortex (PFC) and posterior intralaminar thalamus (ILT), which contains the paraventricular and centromedian nucleus of the thalamus. Recent studies have suggested that distinct glutamatergic inputs to NAc may promote opposing effects on reward-related behavior [4, 5], depending upon how these inputs innervate and activate NAc microcircuitry. While CSDS may impact both pre- and postsynaptic excitatory tone on MSNs, it is unclear what roles PFC versus ILT inputs play in mediating the effects of chronic stress on behavioral and synaptic adaptations.

To understand the role of PFC versus ILT synaptic transmission in CSDS-induced depression- and anxiety-like behavior we will utilize a combination of 2-photon microscopy, electrophysiology, optogenetics and behavior. Our preliminary data identifies increased levels of vesicular glutamate transporter 2 (VGLUT2), but not VGLUT1, within the NAc of susceptible mice, which are presynaptic markers enriched in ILT versus PFC, respectively. Next, using circuit specific optogenetic stimulation with channelrhodopsin (ChR2) of ILT or PFC terminals in NAc coupled to postsynaptic whole cell recording on MSNs, we find evidence for altered synaptic transmission within the ILT-NAc pathway in susceptible mice. We then performed circuit specific in vivo neuronal activation with ChR2 and neuronal inhibition with presynaptic voltage-dependent Ca2+ toxins (tToxins) or halorhodopsin (NpHr) to alter glutamatergic transmission. We find that activation of VGLUT2-containing ILT-NAc-projecting neurons is sufficient for social stress-induced behavioral abnormalities, whereas modulation of VGLUT1 containing NAc-projecting PFC neurons chronically with tToxins had the opposite effect. Interestingly rapid inactivation of only PFC-NAc terminals with NpHr had no effect on social avoidance behavior. Our results suggest a dichotomous role for distinct glutamatergic inputs to NAc in ctronolling the pro-depressant like effects of social stress 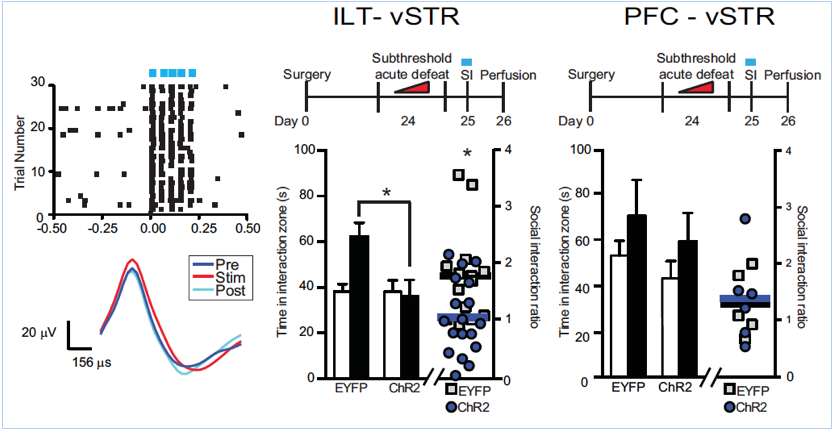 Stress disorders, such as depression and anxiety have been associated with changes in the pro-inflammatory cytokine interleukin-6 (IL-6). IL-6 is produced and secreted by a number of cell types in both the central nervous system (CNS) and peripheral organs. To date, much attention has been focused on CNS mechanisms of the inflammatory response through activation of resident microglia and astrocytes, however, little is known regarding the functional contributions of IL-6 produced and released from circulating leukocytes. To understand the contribution of the peripheral immune system, we utilized a repeated social defeat stress model (RSDS) of depression and anxiety. Importantly, this model allows us to study individual differences in stress responses since approximately 2/3 of all stressed animals termed susceptible exhibit a spectrum of depression-like behavior, such as social avoidance and anhedonia, whereas the remainder are resilient and resist the development of such behaviors. Strikingly, we found that animals reconstituted with bone marrow (BM) hematopoietic progenitors isolated from susceptible animals exhibited depression-like behavior compared to those reconstituted with cells isolated from an unstressed control. Since stromal cells and brain microglia resist lethal irradiation, these results strongly suggest that the BM derived circulating immune system contributes to depression and anxiety in the social defeat model.

Importantly, we find that susceptible mice exhibit nearly 100 fold higher sera IL-6 than resilient mice after their first defeat and this remains elevated 48 hours after the last defeat. When we isolated leukocytes prior to any stress exposure and stimulated them ex-vivo with lipopolysaccharide (LPS), animals that later developed a susceptible phenotype following RSDS initially showed an exaggerated release of IL-6 that negatively correlated with social interaction (SI) ratio. To test the functional relevance of this heightened peripheral IL-6 response to stress, we blocked susceptibility to RSDS by systemically injecting an antibody that neutralized IL-6 in the periphery. We then performed transplants of BM hematopoietic progenitors from IL-6 knockout mice into control mice that had their peripheral immune system depleted by irradiation. BM transplantation from IL-6 knockout mice promoted resiliency to RSDS, while BM transplantation from susceptible mice induced social avoidance following a sub-threshold defeat. Together our studies indicate that individual differences in the inflammatory response to stress underlie the development of social avoidance in the social defeat model. The goals of this project are to further define the mechanisms of individual differences in the peripheral inflammatory response to stress and its relevance to depression- and anxiety-like behavior. 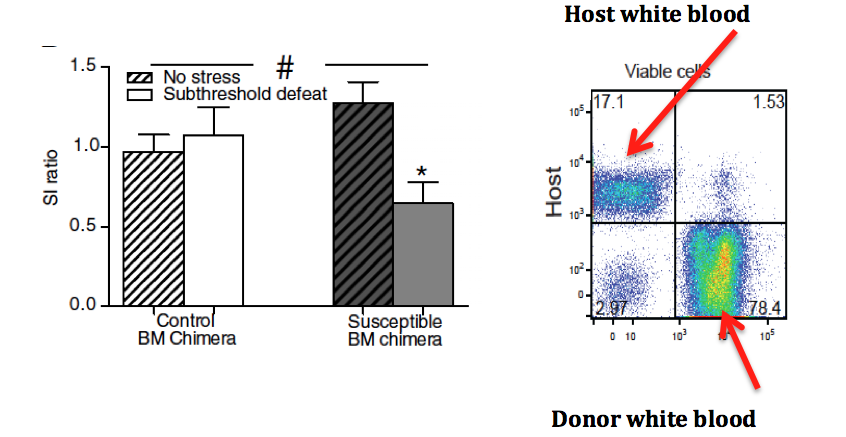 To identify neural circuits that control social behavior, we first established a mouse behavioral model for investigating individual differences in social interaction with an intruder. In this model, aggressors (AGG) develop a conditioned place preference (CPP), while nonaggressors (NON) develop a conditioned place aversion (CPA), to the intruder-paired context. Further, we identify an inhibitory GABAergic projection from the nucleus accumbens (NAc) to the lateral habenula (lHb) that controls intruder CPP. Circuit specific optogenetic silencing of inhibitory GABAergic NAc-lHb terminals of AGG with halorhodopsin (NpHR) increases lHb neuronal firing and abolishes CPP to the intruder-paired side. Conversely, activation of GABAergic NAc-lHb terminals of NON with channelrhodopsin (ChR2) decreases lHb neuronal firing and promotes CPP to the intruder-paired side. Lastly, direct optogenetic stimulation or inhibition of lHb cell bodies in AGG and NON recapitulates the NAc circuit specific behavioral phenotyes. These results demonstrate that NAc-lHb circuit plays a critical role in regulating the rewarding or aversive components of intruder interactions, and provide novel mechanistic insight into the neural circuits modulating social behavior and motivation. In this project, we use a combination of optogenetics/electrophysiology and detailed behavioral analysis to determine whether differences in NAc-lHb circuitry control hedonic drive during nonaggressive versus aggressive social investigation and interaction. 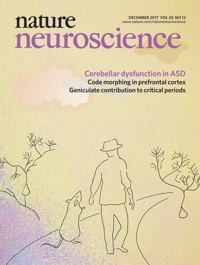 1R01MH104559-01 (Russo PI)
06/01/2014-05/30/2019
NIMH
Peripheral IL-6 from leukocytes controls susceptibility to social defeat stress.
The goal of this award is to understand the molecular mechanisms within leukocytes that control susceptibility versus resilience to social stress. 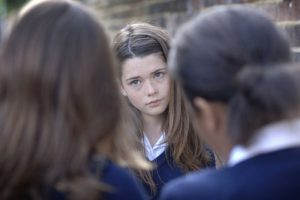 Mirror
Scientists have discovered why bullies pick on their victims and how they chose them? 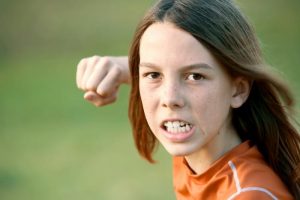 Medical News Today
Neuroscience of bullying: Why do some find it rewarding? 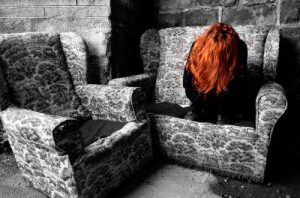 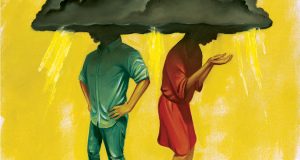 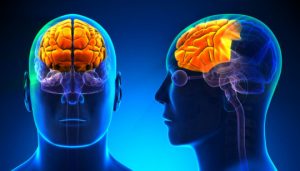 Newswise
Motivation to Bully Is Regulated by Brain Reward Circuits 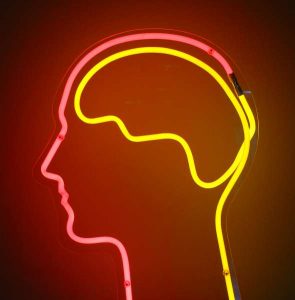