The Laboratory of Translational Psychiatry

The Laboratory of Translational Psychiatry utilizes clinically relevant animal models of psychiatric pathology combined with data from human subjects to better understand the neurobiology underlying psychiatric pathologies. Ultimately, we seek to develop lines of investigation with high potential for translation into treatments for psychiatric patient populations.

In the modern practice of psychiatry the existing treatments for psychiatric pathologies are inadequate for many of our patients. As a practicing psychiatrist I have been fortunate to share in the sense of relief that patients feel when the appropriate treatment is found, finally bringing relief of their symptoms and restoring their life to a semblance of normalcy. Unfortunately, I have also felt the frustration of so many for whom this relief remains elusive. A major difficulty in developing new treatments for patients with psychiatric disease is rooted in our incomplete understanding of the brain and its function. The neurobiology of behavior is tremendously complex, and involves interplay of neural circuits, glial function, endocrine and immune function among others. Work in the laboratory is focused on clarifying the underlying molecular causes of mental illness, while always keeping in mind the ultimate goal of improving the health and well being of patients with mental illness.

Our current lines of research focus on the role of neuroimmune interactions and the gut microbiome in the development and propagation of addictive disorders, depression, and autism spectrum disorder. In recent years it has become clear that brain-immune system interactions in psychiatric pathology are more complex and important than previously understood. As one of the key effectors of immune system development and function the gut microbiome is a key player in these interactions via the so-called gut-immune-brain axis. While modulators of inflammation or the gut microbiome have not yet been translated into tractable treatment strategies for patients, we believe there is tremendous therapeutic potential of immunomodulatory agents and these lines of research will seek to clarify how they may be utilized. 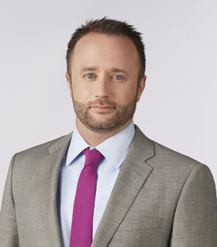 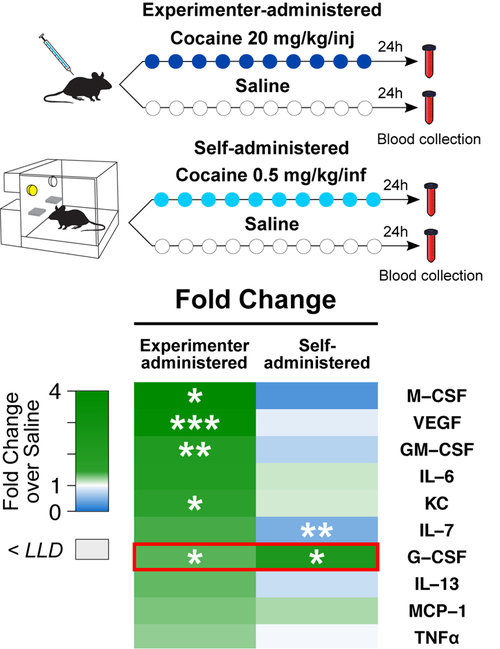 We have recently discovered granulocyte-colony stimulating factor (G-CSF) as an innate immune mediator that is upregulated by cocaine treatment, and correlates with the behavioral response to cocaine. Further studies have demonstrated that treatment of rodents with G-CSF results in enhanced neuronal and behavioral plasticity in response to cocaine. Our goal is to investigate whether manipulations in G-CSF function represent a tractable strategy for reducing the symptoms of drug addiction in human populations. Future efforts will work to clarify mechanistic details of how G-CSF affects brain reward circuitry to drive these changes. We are developing cell-specific manipulations of G-CSF function, using proteomics techniques to characterize synaptic changes, and applying an array of molecular biology and epigenetics methods to clarify the signaling pathways that are altered by this important signaling molecule. 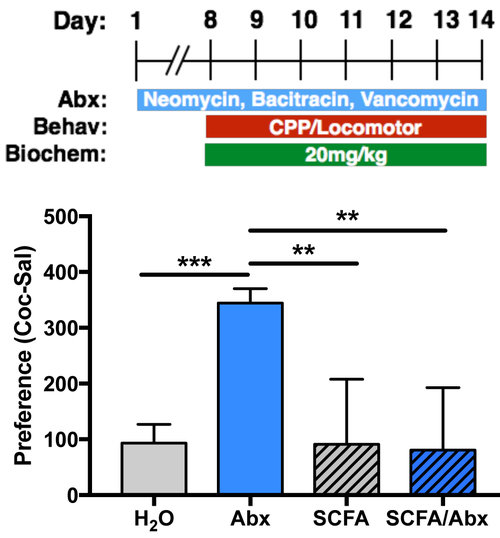 In recent years there has been a growing appreciation that the resident bacteria of the gut (the gut microbiome) can have profound effects on brain function and behavior. Recently, we demonstrated that alterations in the composition of the gut microbiome can affect the behavioral response to cocaine in animal models of addiction (Kiraly et al. Scientific Reports, 2016). Ongoing studies are examining the effects of antibiotics, prebiotics, and probiotics in animal behavioral models of opiate and psychostimulant addiction.  These behavioral studies are being done in parallel with work characterizing how microbiome manipulations affect the molecular, cellular, and epigenetic response of limbic reward circuitry to drugs of abuse.

In addition to this animal work, the lab is beginning a series of studies examining how opiate or cocaine use affects changes in the gut microbiome in human patients. The hope is that these studies will ultimately lead to clinical trials targeting manipulations of the gut microbiome to limit the propagation or development of addictive disorders. 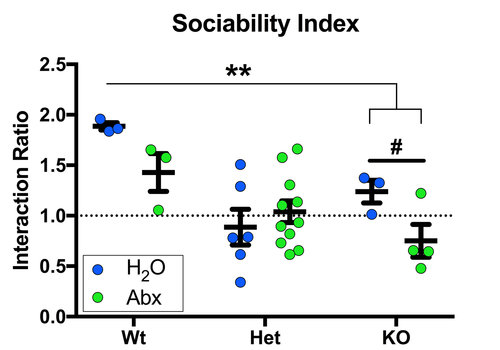 Of all the psychiatric disorders, there is perhaps the strongest evidence for a role of the gut microbiome in the development of autism spectrum disorder. The gut microbiota undergo large-scale changes during the first years of life on a similar timescale to the development of the symptoms of autism. Children with ASD have been reported to have changes in their gut flora, frequently have gastrointestinal symptoms, and there are even anecdotal reports of some symptoms improving after treatment with antibiotics. To investigate the mechanistic role that the gut microbiome might be playing in the development of autism, we are performing manipulations of gut bacteria in an animal model of Phelan-McDermid Syndrome (Shank3KO mouse). These studies will allow us to directly investigate a gene x microbiome effect on behavior and neurobiology.

Through the Seaver Autism Center we are also actively recruiting patients with Phelan-McDermid Syndrome to see how their gut flora may differ from that of non-affected children. These studies may pave the way for development of therapeutics targeting the gut microbiome to alleviate the symptoms of this often debilitating condition.

Drew received his MD and PhD degrees from the University of Connecticut School of Medicine. He performed his doctoral thesis work in the laboratory of Dr. Betty Eipper studying dendritic spine dynamics, behavioral response to drugs of abuse, and cell-surface receptor trafficking in relation to the post-synaptic Rho-GEF Kalirin-7. From this work, Drew published numerous manuscripts, and was awarded a prestigious F30 NRSA Fellowship from NIDA to support his research efforts. During his clinical clerkships Drew received the Bloomberg Award for medical student excellence in psychiatry.

Drew enrolled in the Psychiatry Residency at Icahn School of Medicine at Mount Sinai, and in addition to being Chief Resident for the final two years of his training, he also completed a research fellowship in the lab of Dr. Eric Nestler. During his time in the lab he developed his own research program examining the role of neuroimmune interactions and the gut microbiome in addiction, autism spectrum disorder and depression. In addition to multiple first and senior-author publications he was awarded an ACNP Memorial Travel Award, was selected to the NIMH Outstanding Resident Award Program, was chosen as a Leon Levy Fellow in Neuroscience, and a Seaver Family Foundation Fellow.

In addition to running the lab, Drew works as a physician in the emergency room of Mount Sinai Hospital, and sees a very limited number of patients in private practice. Rebecca Hofford got her PhD from Texas A&M in 2012 where she studied the effects of social environment on adolescent sensitivity to morphine. She continued her career as a postdoc at the University of Kentucky studying the mechanisms underlying the attenuation of drug reinforcement caused by environmental enrichment. She has continued her academic journey across the United States to end up here at Mount Sinai where she expects to learn some awesome neuroscience. In her spare time, she enjoys free yoga classes, reading “non-science” things, binge watching Netflix, hiking, skiing, and fully embracing her inner cat lady.

Baltimore native Katherine Meckel completed a Bachelor’s of Music in Voice Performance and a Bachelor’s of Arts in Biochemistry, Psychology and Neuroscience at Lawrence University; under Dr. Bruce Hetzler, she researched the effects of methylphenidate on visual evoked potentials and behavior. After graduation, she joined the Pekow lab in the Section of Gastroenterology at the University of Chicago, where she developed an interest in brain-gut-microbiome interactions. In her spare time, Katherine enjoys playing board games, singing opera and musical theatre at the top of her lungs, watching copious amount of Star Trek, learning about dinosaurs, and feasting on blue crabs. 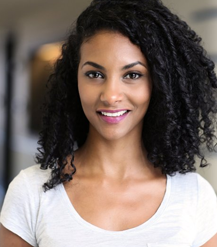 London bred Aya completed a Master’s degree in Toxicology in 2010 from the University of Surrey in the UK, where she first began to develop an interest in addiction research after studying the role of adenosine and metabotropic glutamate receptor interaction in cocaine addiction. Upon completing her master’s, she worked for the governmental body Public Health England as a toxicologist for the next 2 years. In 2013 she returned to the University of Surrey to embark on a PhD program where her research focused on the effect of prolonged exposure to milk derived casomorphine on the normal development of opioid receptors in the brain as well as the effect on the gut microbiome. In her spare time, Aya enjoys traveling to weird and wonderful places around the world, trying out exciting cuisines, reading and watching movies ( anything but action!).

Kelsey graduated from Temple University in May 2018 with a B.S. in Neuroscience. At Temple, she spent 3 years working in Dr. Lisa Briand’s Behavioral Neurophysiology lab, where she explored the neuroadaptations that accompany stress and addiction. Though a true Philadelphian at heart, Kelsey has embraced her life in New York city as a PhD student in the Neuroscience department at Mount Sinai. In her spare time, Kelsey loves doing touristy activities around the city, reading, running, and petting dogs. 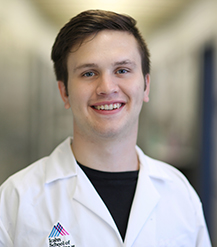 Tanner graduated from Drew University (Madison, NJ) in May 2019 with a BA in Neuroscience and Psychology. During his time at Drew University, he worked with Dr. Christina McKittrick in collaboration with the Kiraly Lab to complete an undergraduate thesis, where he explored the neuroimmune interactions between G-CSF and cocaine in regulating the proteomic landscape of the nucleus accumbens. Born and raised in Newton, New Jersey, Tanner grew up playing soccer and lacrosse. In his spare time, he loves cooking and playing drums.

The Kiraly Lab is expanding! We are actively seeking postdoctoral fellows, graduate students and research staff. If you are interested in performing cutting edge work dissecting the roles of neuroimmune interactions and the gut microbiome in psychiatric diseases please contact drew.kiraly@mssm.edu.

Our lab utilizes a broad range of models and techniques, we are looking for a highly motivated individual with a PhD or MD (or both!) with background in Neuroscience, Cellular or Molecular Biology, Biochemistry, or any related fields.

For inquiries please contact the PI directly. To apply please send a full CV, three professional references, and a brief statement of scientific interest to drew.kiraly@mssm.edu.

Any PhD or Masters degree candidates at Mount Sinai who might have interest in working in the lab should contact the PI directly (drew.kiraly@mssm.edu) to discuss rotation projects.

Please email drew.kiraly@mssm.edu if you would like to talk about current opportunities to join the Kiraly Lab.